How electricity is generated

All the hydro power plants of Dravske elektrarne Maribor on the Drava River (except the hydro power plants Zlatoličje and Formin) are basically constructed in such a way that the riverbed is dammed by a reinforced concrete barrier. Turbines and generators are installed in the barrier. Each turbine is connected to a generator with a vertical shaft.

The barriers also feature spillways with sluices which are used to release excess water over the barrier. A reservoir is formed behind the barrier, and at the same time, the height of the barrier determines the drop of the water needed to power the turbine. The power of a turbine depends on the size of the water drop and the quantity of water flowing through the turbine. The water propels the turbine, which in turn powers an electric generator, which produces electricity under the principle of electromagnetic induction.

Production of electricity under the principle of electromagnetic induction

Electromagnetic induction is based on the fact that every substance consists of atoms which contain subatomic particles with an electric charge. An atom has a nucleus with protons and neutrons, and electrons which are bound to the nucleus. Electrons are negatively charged, with the nucleus containing an equal number of positively charged protons. Outwards, an atom is electrically neutral. Subatomic particles of the same electric charge bounce back from each other, while those with a different charge attract each other. What differentiates materials is also how tightly electrons are tied to the nuclei in their atoms. Substances in which electrons are strongly bound to the nuclei are electrical insulators. They have no free electrons and do not conduct electric current.

Electrical conductors, however, are substances in which electrons move freely (they have free electrons). If such a conductor (usually a copper wire) is placed into a magnetic field and is moved laterally to the direction of the field, a force is applied on the electrons in the conductor, pushing them towards one end of the conductor (depending on the direction of the movement). This is how a surplus of electrons is generated. Because they have a negative electric charge, we speak of negative electric potential. An equal deficit of electrons is generated on the other end of the conductor, which has a positive potential. The difference between the potentials is voltage, and is called induced voltage. It induces electric current if both sides of the conductor are connected with a conductive wire. 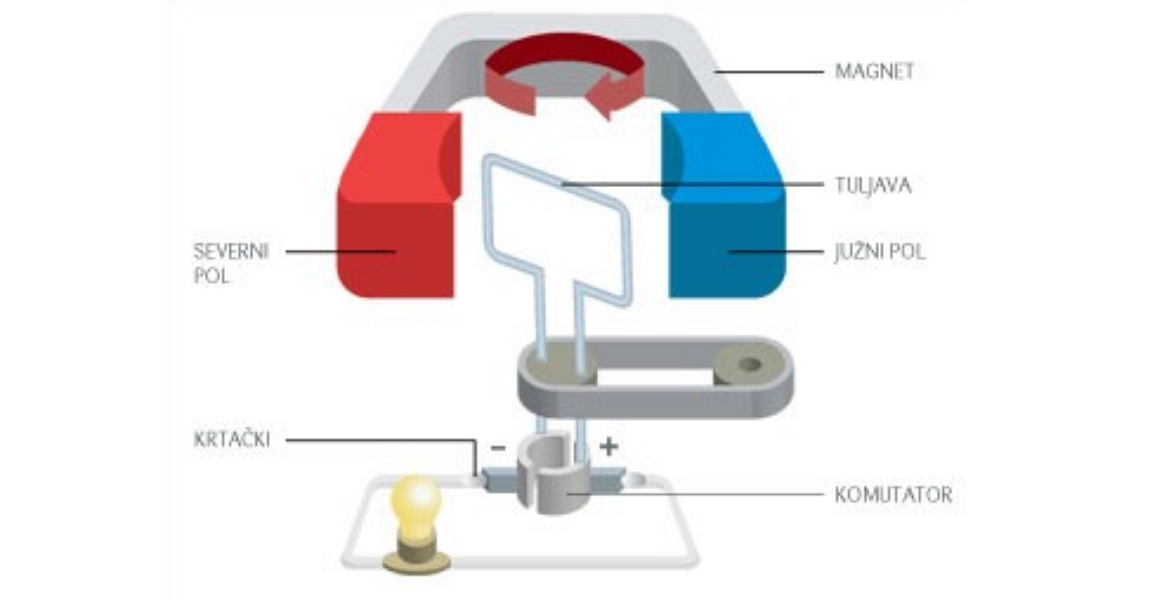 In the early days of electricity usage, power plants were small in comparison with those of today, and electric generators directly provided electricity to users in the vicinity. They were supplied with voltage that could not be too high due to the danger to people posed by electric shock. The first generators produced so-called direct current in which the current always flows in the same direction.

The use of electricity, due to a number of advantages, quickly grew, and the need for more powerful plants that would be constructed near suitable resources (rivers, coal mines) became evident. However, the problem of how to transfer electricity to remote users remained, for enormously large sections of power transmission lines would be required to minimise the level of energy loss during transmission.

With the invention of alternating current, in which the direction of current changes (this happens 50 times a second in our network), and multi-polar generators, which also operate according to the described principle of electromagnetic induction, the use of electricity has greatly expanded. Alternating current makes it possible to change the voltage using a transformer relatively easily. The higher the voltage, the less energy is lost during transmission. Nowadays, voltage produced by a generator is transformed into higher voltage and transmitted via transmission lines with voltages of 110 kV, 400 kV and higher over long distances. In order to supply power to the users, voltage is then transformed into lower values, down to the voltage used in households (220 V, or 380 V for three-phase connections).